If you're trying to figure out how to lose the most weight in one day, then you'll love to read all about my extreme weight loss challenge.

I will show you exactly what I did to lose almost 20 pounds (9 kilograms) in just 24 hours.

But before you read any further, you need to know what I did IS EXTREMELY DANGEROUS. So DO NOT REPEAT everything that I did.

I know my way around weight loss science, so I did try to stay as safe as possible during my extreme weight loss experiment (you'll see how I did that in a minute).

But no matter how much you know about your body, going through such an intense experience can literally cause your heart to fail[1]. So don't follow in my footsteps.

Before we get started, here' a short overview of everything that I've covered:

If you really want to lose the most water weight in a day, you need to have a lot of water in your body to begin with.

So before I even began my extreme weight loss challenge, I tried to gain as much water weight as possible.

I knew that the more water weight I put on before the experiment, the easier it will be for my body to let go of that weight.

So here's exactly what I did before my extreme weight loss experiment:

Now, some people might think I cheated, that I tried to "fake" better weight loss results because I gained a lot of water weight before my challenge.

But the main reason why I did this was to prevent ending up in a severely dehydrated state (where my body would lose too much water). If I ever reached that state, I'd risk serious damage to my health.

To me, no weight loss challenge will never be worth endangering my health, so I made sure I "loaded up" as much water weight as possible.

Ok, so this is how I put on a lot of water weight before my challenge, now let's take a look at how I actually lost that weight.

The hell I went through

First, I heated my living room to a nice "working temperature".

Then, I drank down one caffeine pill and 2 pills of Water Out. Both of these act as a diuretic, which means they help you get rid of that water weight faster. Caffeine does one more thing, but we'll get to that later.

I started my 24 hour timer at six o'clock in the afternoon, and I was going to finish exactly 24 hours later.

The room temperature was already high, but I still put on some warm clothes. I could have gone overboard, put on some plastic body wraps, or added 3 more layers of clothes. That would make me sweat even more (and lose weight even faster), but I felt too hot as it was.

Exercising in an overheated state was stressful enough on its own, so I did it at a slow pace. The entire time I spent on my elliptical trainer, I exercised at the optimal fat-burning pace.

How I wiped out ALL my energy reserves

I kept waking up during the night, because my body was burning up even hours after it had a chance to cool down. In the end, that probably helped speed things up, because by 8 am the next morning, I already lost 10.9 lbs (4.9 kg).

I took another caffeine pill and another 2 pills of Water Out, but this time, I only drank them down with 1 dcl of water. After my living room heated up again, I spend another two hours on my elliptical trainer. 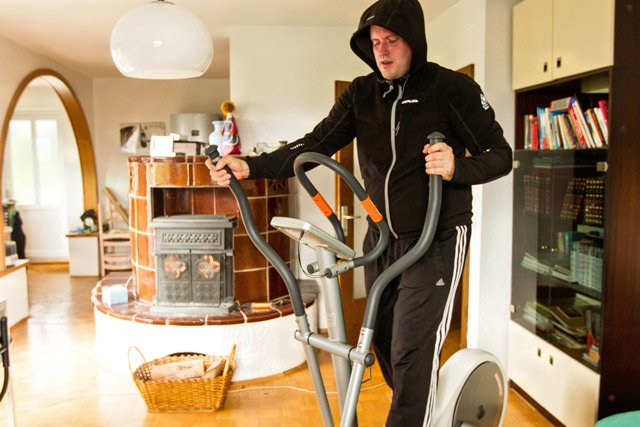 I burned off another 1000 calories (2200 in total), but now I was completely out of gas. Our bodies store about 2000-2500 calories of energy (in a form of glycogen), and by 1 pm I completely wiped out those energy reserves.

At this point, my body was forced to rely on nothing my body fat reserves for energy. The problem with our body fat stores is, that the energy from them gets released incredibly slowly. In other words, I couldn't exercise on the elliptic anymore, because even the smallest of efforts would exhaust me completely.

I drank down another caffeine pill with 1 dcl of water. I knew caffeine speeds up the release of energy from your body fat reserves, and this should give me a temporary energy boost.

And it worked. However, caffeine only got me through another 200 calories (2400 in total), before I was out of energy again.

I still had three hours left, so I pulled the last ace out of my sleeve. I ate about 100 grams of dried dates, because I knew that those 300 calories worth of date-sugar will rush into my blood stream really quickly. And yes, because of those dates, it only took a couple of minutes before I was back on the elliptic (exercising like nothing happened).

Those dates took me through another 400 calories (2800 in total), but I still had had some time left.

I used every mind trick I ever learned to get through those last 200 calories. And in that exhausted state, that final half an hour felt like eternity. I had to lie down on the floor three times, just to regain enough strength to get back on the machine.

But did I actually keep any of that weight off?

When your body loses a ton of water, you have to start drinking slowly. I knew this, but I still went overboard with my drinking (I didn't even realize how thirsty I was before I actually started drinking), so my stomach did hurt for a while.

I also couldn't start drinking "pure" water, but I had to add electrolytes (just a fancy word for minerals like sodium, calcium...) to it. So I added an isotonic powder to the water, to slowly restore the balance of minerals and water in my body.

How much weight did I regain? Well, after I dealt with my thirst, I faced the strongest onset of hunger I felt in years.

So I did eat a little more than usual (to make up for the last 24 hours), but it still took the next two days, before my cravings returned to normal. Those two days were also enough for almost all of my weight to come back.

Why would any sane person spend do this?

There really is just one reason why I put myself through this dangerous weight loss experience.

I wanted to personally demonstrate just how fake the promises of "overnight" weight loss results can be. Now, I did lose more weight in 24 hours, than some people can lose in a month.

But the fact that I regained ALL of it within two days, should tell you that I actually lost little to no body fat.

So hopefully, because of what I did, a few less people will be scammed into dangerous, overnight "quick-fixes".

This is literally the only "understandable" reason I can think of why anyone would even begin to ask themselves how to lose the most weight in one day:

You absolutely must drop 5 or 10 pounds (or more) in just one day, because something really important depends on it.

And I'm not talking about ridiculous goals like looking better on the beach tomorrow. I'm talking stuff like a professional boxer or an mma fighter having to "make weight".

If you're in that sort of trouble, then you'll probably go through with some of the things I did (if you are, then at least be smart about it and stop as soon as you've hit your target weight).

But like I said, just because I went through with this experiment, I can't in good conscience recommend ANYONE to try and repeat the stuff that I did.